This release contains lots of important upgrades, from developer experience, to performance improvements, to maintainability. The primary focus of this release is the ability to connect your project to Webiny Control Panel to unlock extra features, analytics, etc. Another important milestone is a completely new approach to building and customizing your project infrastructure using Pulumi. This allowed us to remove all the infrastructure code from the project, making your project easier to understand, maintain, and upgrade.

Note that some of these improvements are only available if you're creating a new project with Webiny 5.29.0. If you're just upgrading from earlier versions, your project will remain mostly unchanged. 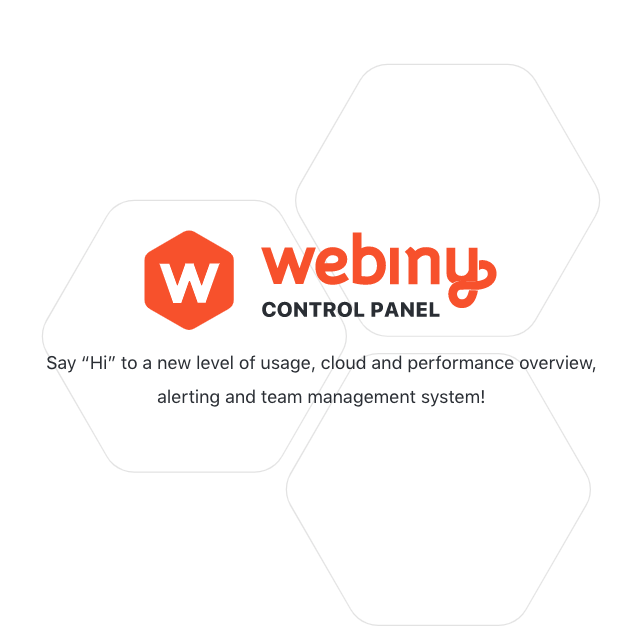 Webiny Control Panel is a brand-new service that will provide additional benefits on top of existing Webiny projects!

For starters, it will enable teams to have a better overview of what’s happening in their Webiny projects. Tracking the number of GraphQL API calls, CI/CD environments, and team members are just some of the features that are included in this initial Alpha release. 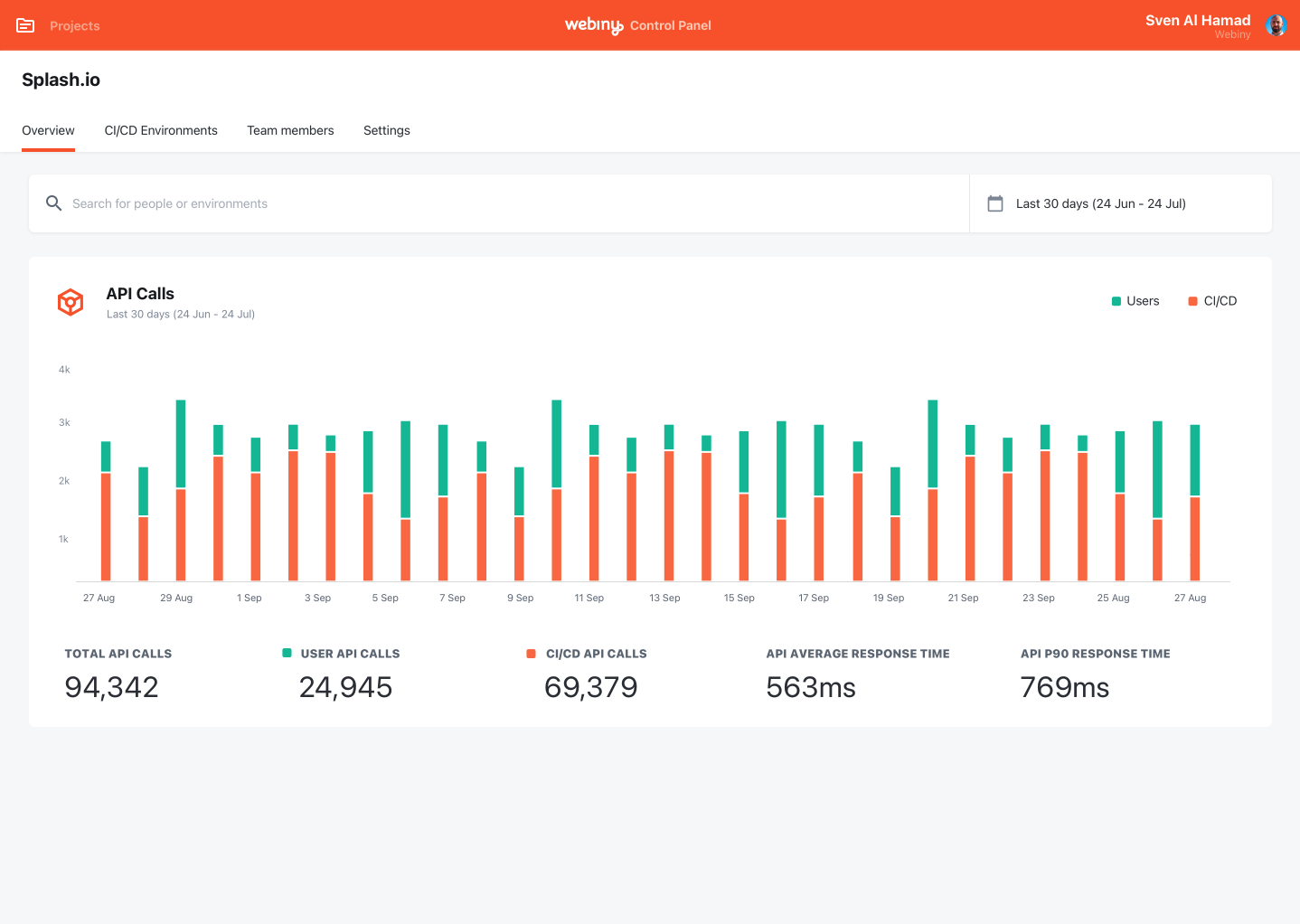 Webiny Control Panel will also provide a way to unlock special Webiny features, like Multi-tenancy and soon-to-be-available Advanced Publishing Workflows. And this is just the beginning! We already have a couple of other cool features on our roadmap, so definitely stay tuned for that.

Ultimately, we believe that, with Webiny Control Panel, users will have a much easier way of managing multiple Webiny projects. And, with the new Webiny features that it will unlock, users will be able to take their Webiny projects to the next level.

Webiny Control Panel is now available to the subscribers of our Alpha waiting list. If you’re interested in taking it for a spin, reach out via our Community Slack

, and the team will provide the necessary details.

Can I Use This?

At the moment, Webiny Control Panel can only be activated with new projects created with Webiny version 5.29.0 or greater. But, if you have an existing project already that you’d like to activate, feel free to get in touch with us on our Community Slack

Until this release, the Prerendering Service used a cron job to check if there are any tasks that need processing (every 5 minutes, by default). With the migration to event-driven approach, we now use Amazon EventBridge

to issue and process prerendering jobs immediately, in a faster, and more scalable manner.

The internals of the Prerendering Service were rewritten to play nicer with parallel rendering, juggle less data to and from the database, and handle different tenancy setups in a robust way. Database records were also redesigned to optimize for various access patterns.

Regarding the programmatic usage of the Prerendering Service, it is now greatly simplified, and detached from any infrastructure-related information (like bucket names, Cloudfront distribution IDs, etc.). You simply specify paths to render, and can optionally tag your pages for custom logic. There’s now also an ability to issue full website re-render, but exclude certain pages, if necessary.

How does this affect my existing system?
Your database records will be upgraded automatically upon the first deploy of your system to your AWS account.

Thanks to some of our users that run multi-tenant systems, we were able to get useful insights into various request handling flows, and improve tenant routing. The two most important improvements related to tenant routing are:

When do I need a custom domain?
A custom domain is mandatory when having more than one tenant in your system.

With this release, we’re introducing a brand new project setup, which, we believe, will be a huge step forward in making Webiny as easy to grasp and use as possible!

The following are the most import changes the new setup brings.

Can I Use This?

Before continuing, note that the new project setup is only available for new projects created with Webiny version 5.29.0 or greater.

Prior to this release, once a new Webiny project has been created, developers would immediately be presented with (or intimidated by) lots of different folders and files. For example, if we were to look into the api

folder (the API project application), we would be able to find five different folders which contain application code for 14 different AWS Lambda functions. Together, these functions form Webiny’s GraphQL APIs.

And while this approach does give developers the ability to customize every aspect of Webiny, in practice, we’ve learned that the majority of these are not really something developers are concerned with. When talking about the api

With this, and a couple of other use cases in mind, we’ve decided to drastically cut down on the total number of files and folders that are included in every Webiny project. This includes:

With the changes listed in the Removed Unnecessary Files and Folders section in mind, one might ask themselves:

If there are only 2 AWS Lambda functions in my API project application now, what happened to other 12? Do they still exist?

Well, these functions still do exist, but, from now on, they will actually be prebuilt for developers’ projects!

This means that, upon deploying the API project application, developers do not need to build (compile the application code) these functions themselves. In other words, much faster deployment times!

With this release, we are introducing the new Core

project application, whose main purpose is to define and encapsulate the stateful cloud infrastructure resources. These are your Amazon DynamoDB

which we’ve introduced with this release, to manage events via event buses.

The API project application still exists, but, from now on, it strictly defines the stateless resources responsible for hosting your project’s GraphQL APIs. These include Amazon API Gateway

This new organization will enable us to create some really interesting features in the near future, so stay tuned for that!

Another big feature we’re introducing with this release are Pulumi apps!

The main purpose of a Pulumi app is to define and encapsulate Pulumi infrastructure code, and, equally important, have it easily shipped as part of every Webiny project, while still maintaining the full ability for the developer to perform further customizations to existing resources or even introduce new ones.

Essentially, for new Webiny projects, this enabled us to replace multiple files and folders that contained Pulumi infrastructure code (pulumi folders) with a single import statement and a function call made within the already existing webiny.application.ts files. For example, if we were to look into the apps/website/webiny.application.ts

file, we’d be able to see the following:

Apart from ensuring our Website project application is deployed correctly, the createWebsiteApp function also exposes the pulumi parameter, which, as mentioned, enables us to perform further customizations to existing cloud infrastructure resources or even introduce new ones. For example, with the following code, we’re updating the description of the Cloudfront distribution that’s deployed as part of the Website project application:

This approach also allows us to build different setups based on the environment you’re deploying, or features you want to use, without having exact copies of files (like we did until now). Internally, Pulumi apps now support modules (logical chunks of infrastructure), which are used to compose the entire app. These modules can be enabled and configured based on the parameters you pass to application factories (e.g., createWebsiteApp) .

Finally, what about TypeScript support? Well, we’re glad to report that full TypeScript support is included! With the help of a modern code editor, developers should be able to easily see all the cloud infrastructure resources (and respective configuration parameters) that are included in the underlying Pulumi app.

As mentioned at the beginning, we believe the new project setup will be a huge step forward in making Webiny as easy to use and grasp as possible. But that’s not all!

The fact that the vast majority of the application and infrastructure code has now been abstracted away from developers also brings extra benefits in terms of maintenance and project upgrades, both for you, but also for the core Webiny team! This means far less codemods and time wasted, and also more confidence when shipping new versions with infrastructure/application code improvements.

Ultimately, what this means is that users can expect much simpler project upgrade procedures and faster bug fixes from the Webiny team!

The following fixes are slightly less epic, but no less important!

There was an issue with getting and updating your own user account via the GraphQL API, if the security group your user belonged to didn’t have permissions for managing admin users. This is fixed by disabling authorization for the duration of the getUser SDK call, since, naturally, we have to allow querying of our own data. Once the data is returned, authorization is turned back on.

Shout out goes to our community member Alan Lam

for reporting this issue! 🙌

This one belongs to the “small annoyances” department. The issue was only visible for Lambda function cold starts, when issuing a Login mutation. The login form would still be visible as if you’re logged out, while in fact, you’re authenticated against Cognito, but Webiny is in the process of loading your identity information. Hitting a cold start would look like nothing is happening, and you’re supposed to log in again. From now on, a shiny new loading overlay will be visible for the duration of the GraphQL query.

Prior to this release, via the project root’s package.json

file and its resolutions property, the versions of Pulumi NPM packages were locked for quite some time now. As the time passed by, these versions became more and more outdated, so we made sure this is no longer the case. From now on, every Webiny project will be accompanied by the latest version of the Pulumi CLI and related NPM packages.

Prior to this release, during a project deployment, there was a chance users would stumble upon a Pulumi-related error, saying that the resource provider plugin could not be found.

NPM package, which would then immediately affect the Pulumi CLI and instruct it to also use the same version of the mentioned resource provider plugin. So, before proceeding with their deployment, users would be required to install the mentioned plugin manually.

In order remove the unnecessary DX friction, in case the mentioned resource plugin is missing, Webiny CLI will now automatically download it.

Removed Some of the Scaffolding Utilities

, we decided it’s time to start cutting down on some of the “serverless application framework” aspects of it. So, with this release, we’re removing the following scaffolds:

On the other hand, the three scaffolds that will still be available via Webiny CLI are:

We’ve also removed the related documentation, but note it’ll still be available for previous versions of Webiny (just in case some users still need it).

Continuing from the Removed Some Of the Scaffolding Utilities, we’ve also removed the Custom App Tutorial from our docs portal. The reasoning is the same - as the “serverless application framework” is no longer our focus, we’ve determined the article is no longer needed.

The tutorial will still be available for previous versions of Webiny (just in case some users still need it).