Whenever you’re doing an upgrade, we recommended that you first deploy your changes into one of your pre-production environments, like dev or staging. Once you’ve confirmed everything works as expected, then you can start planning moving into the production.

Learn how to deploy your project into multiple environments with the deploy command.

When deploying to production environments, in order to prevent data loss, make sure to backup data stored in your ElasticSearch

If you have any additional questions or concerns, please don’t hesitate to send us a message via our community Slack channel

When planning an upgrade, always check if there’s a dedicated guide for your specific Webiny version. All the guides are located in the menu on the left, for example: 5.9.0 → 5.10.0. If you see the guide that matches your versions, follow it. It may contain additional steps to upgrade your Webiny project, as sometimes there are changes in project file organization, project configs, etc.

If there’s no dedicated article, upgrades are as easy as upgrading all the @webiny/* packages to the desired version.

Since every Webiny project is using yarn

as the package manager, to upgrade all @webiny/* packages, you can use the yarn up

The yarn up command updates all your package.json files in all workspaces across the project. Learn more about it in the official documentation

Once that’s done, you can deploy your project.

You should never skip versions as each upgrade can contain additional manual steps that need to be taken. The steps will always be listed in upgrade guides.

Once Upgraded, Do We Need to Re-Deploy the Webiny Project in Order to See the Changes?

Yes, once you’ve completed the upgrade steps, in order to actually see the new features and fixes online, you need to re-deploy you project. Which project applications you need to re-deploy? It depends on the released fixes and features, but the easiest approach would be just to deploy the entire project, using the yarn webiny deploy command.

Is It Possible to Upgrade Webiny From V4 to V5?

Differences between these two versions are so vast that it’s simply impossible to do the upgrade. If you’re interested in migrating your existing project to v5, unfortunately, you will have to recreate your existing content in a new v5 project, either manually, or by writing your own custom migration scripts.

How Can We Check What's the Version of Webiny We're Currently At?

In your terminal of choice and in your project root, run the following command:

Additionally, the version is also shown in the deployed Admin Area React application, at the bottom of the main menu: 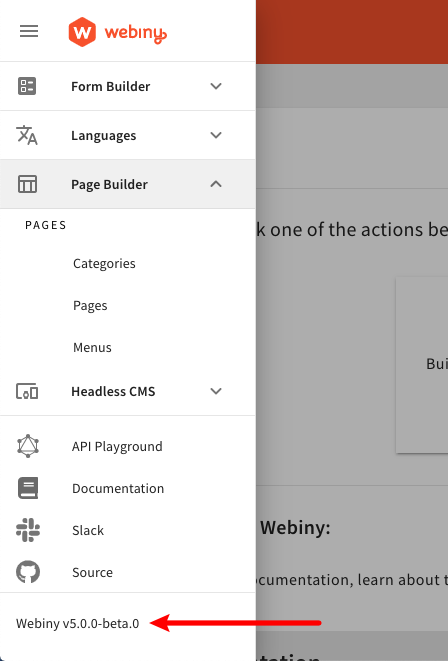