If you just want to jump straight into the code, take a look at the Securing Your Application tutorials section.

In this article, we cover how Webiny Security Framework (WSF for short) works in the context of Webiny API, what hooks it introduces, and how it hooks into the existing request lifecycle hooks to perform its main tasks (like authentication and authorization).

This article uses terms like authentication, authorization, identity, and permissions extensively. These terms are described in details in the Introduction article. If you’re not familiar with these terms, make sure you read that article first.

WSF itself, just as any other Webiny application, is a collection of plugins. When these plugins are registered into the application, WSF hooks into some request lifecycle hooks. By doing so, it adds new tools and introduces new hooks to allow developers write plugins for them.

To visualize the process of authentication, authorization, and better understand when things are being executed, let’s analyze the following diagram: 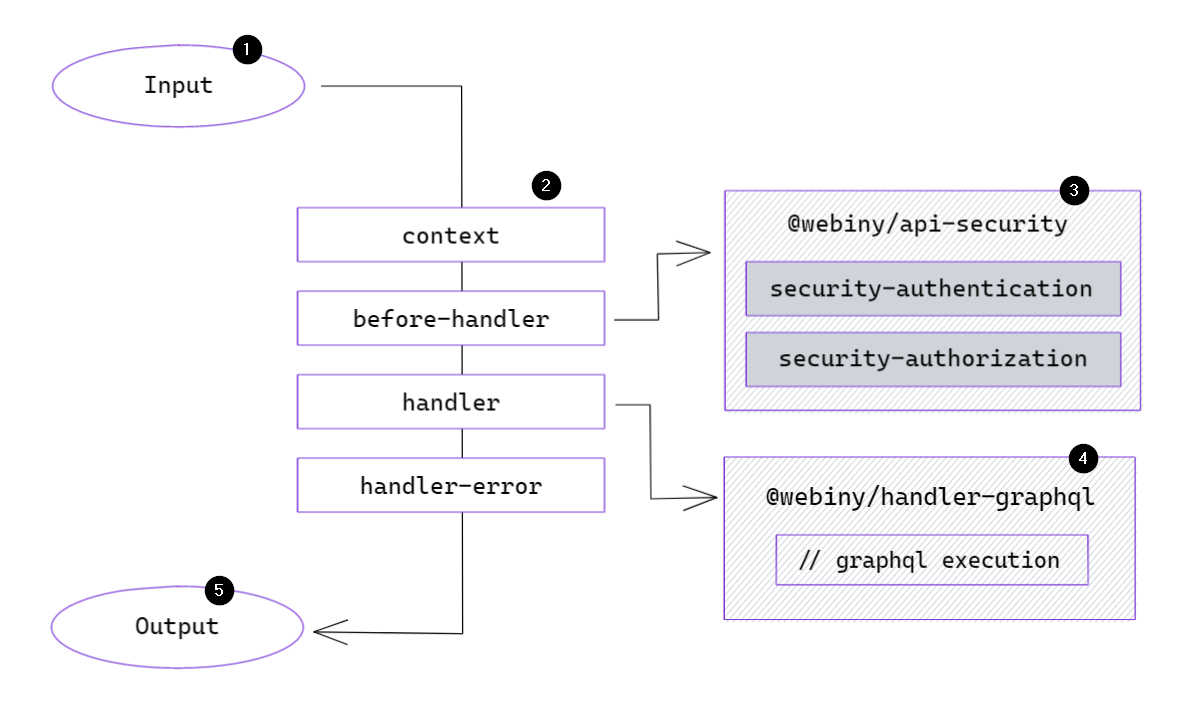 The lifecycle of any request begins by invoking a Lambda function (1). Once invoked, function handler runs a series of hooks (2).

is created for every Lambda function invocation and the context hook is processed to allow plugins to extend the context object, which is accessible across the application (e.g., in all resolvers of your GraphQL API). The context object serves as a central registry for data, utilities, etc.

This is the hook WSF uses to create a context.security object. All the existing Webiny applications depend on it to interact with WSF (to access identity, get permissions, etc.).

Once the context hook has finished executing, Webiny executes the before-handler hook.

The purpose of this hook is to allow developers execute arbitrary logic after the context object is fully built, but before request payload parsing begins. This is particularly useful for WSF, which, at this point, executes authentication.

Authentication within WSF has no built-in logic. It simply runs the security-authentication hook (3). The developer is responsible for registering plugins to perform actual authentication:

When an authentication plugin verifies the provided credentials, it returns an identity object containing the information retrieved from the identity provider

WSF only requires a couple of properties to work:

Your actual identity object can contain a lot more information which you can use in your authorization plugins or business logic. WSF, however, will only require the properties described above.

Keep in mind that identity and user are not the same thing. A user is a superset of identity, meaning, it will have a lot more information associated with it. That information is often related to your project’s business logic (user profile, payment info, addresses).

Identity doesn’t need to contain any of that information. A good example of this is an API key. API keys don’t have profiles or addresses, but they will go through authentication process and produce an identity object.

How you handle user information is up to you. You can include it as part of the authentication process and append all the info to the SecurityIdentity object we described previously, or you can add new utilities to the context object to retrieve user information based on the identity (e.g., create a getUser() function and implement that logic however you like).

After the before-handler hook, the system continues with the request processing by executing the handler hook. This hook passes the context object to every handler plugin until one of them returns a response (these will be covered in details in a dedicated article).

How the request is being parsed, is irrelevant. It can be a GraphQL handler (4), a regular REST API handler, or something completely different. Think of this hook as a traditional express application with middleware, where the request goes through a pipeline, until a response is returned.

The important part is that some time during code execution (4) some part of your application will need to check for certain permissions. At that point, it will reach out to the WSF to fetch a permission. Here’s an example using a GraphQL resolver:

When the code executes context.security.getPermission(...), WSF will process the security-authorization hook (3) and return the matching permission object, if found.

If everything goes well, and your identity has the permissions to execute the requested operation, the request will be converted into a response in the handler hook and function invocation will end by sending the response (5) to the client who originally invoked the function.

Where and How Do I Store Permissions?

Since authorization plugins are asynchronous, you can store your permissions anywhere, even on remote services. You can also generate permissions dynamically based on some identity information. As long as you can provide an array of permissions back to the security framework, everything will work smoothly.

Can I Use the Default User Management Implementation for My Custom Apps?

Usually, we recommend managing your app’s users separately from the default admin users. Every project is different, has different requirements (like signup, email confirmations, etc.), and it’s faster and easier for you to create a custom user management module for your specific needs.