The process of application development is much more than just writing application code. It entails several different subprocesses, which are equally, if not more, important. For example:

In the following sections, we cover some of these subprocesses and provide best practices around how to structure and implement them, within your CI/CD workflow.

For starters, we give a quick introduction on what CI/CD is and what are its different phases.

Continuous Integration (CI) is a software application development practice where developers integrate code into a shared repository frequently, preferably several times a day. Each integration can then be verified by an automated build and automated tests. While automated testing is not strictly part of CI, it is typically implied.

Continuous deployment (CD) is a software application development practice where code changes are automatically prepared for a release to production.

Note that the CD abbreviation can also stand for continuous delivery, which also entails continuous deployment of your project, only in a more manual fashion

Continuous delivery is the ability to deliver software that can be deployed at any time through manual releases; this is in contrast to continuous deployment which uses automated deployments.

In the rest of this key topics section, when mentioning the CD abbreviation, we’re explicitly referring to the continuous deployment.

In general, the CI/CD workflow, sometimes also referred to as a release cycle, consists of a couple of phases: 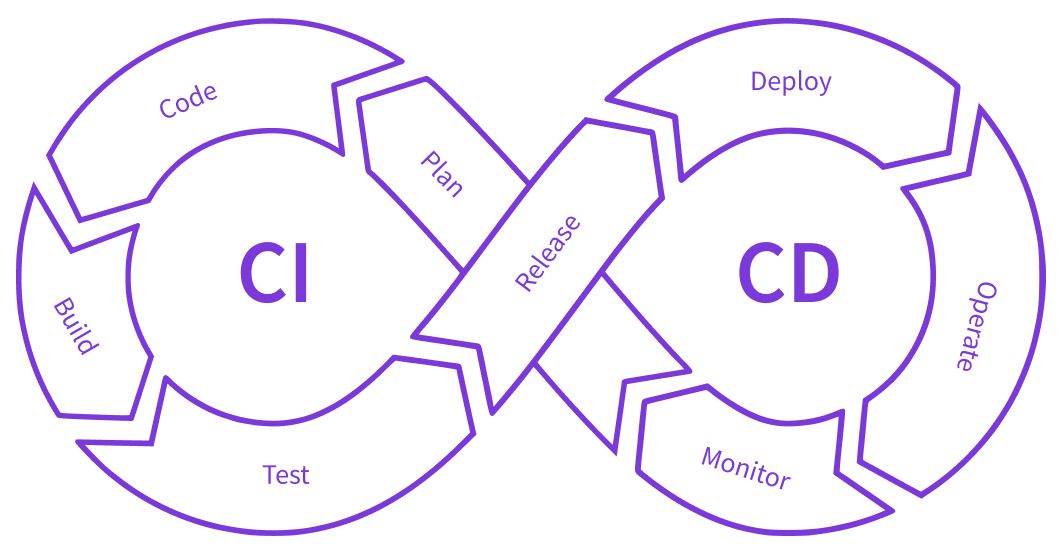 It all starts with the planing phase, in which we define the work that needs to be done, and delegate it to different members of the team. Teams use different approaches in order to organize the team and track its progress, for example Scrum

Once the work has been delegated, every developer goes through the code, build, and test phases. Different tools, processes and services can be used here, starting from services for code storage and version control

Most of the mentioned tools are specific to the JavaScript / Node.js ecosystem, and come set up by default in every Webiny project. A full list of used technologies can be found in the Tools and Libraries topic.

Once the tests are passing, we reach the release and deploy phases, in which new changes are deployed to actual users. Again, a plethora of different deployment tools can be used in this space, like Pulumi

, and so on. With the tools, there are also different deployment strategies that can be utilized, like blue/green and canary deployments, A/B testing, and so on.

By default, Webiny projects are deployed with Pulumi - a modern infrastructure as code (IaC) solution. Check out the Iac with Pulumi topic to learn more.

Last but certainly not the least, we reach the operate and monitor phases in which we are, essentially, ensuring that the system that was deployed is operating as expected. Different speed and resource metrics, error reports and alerts are what provide the information on how stable our system is.

In general, monitoring serverless applications has shown to be a bit harder than monitoring “traditional” applications, mainly because of their distributed nature. They are almost always constructed out of several services that talk to each other and trying to find the service that is the root cause of a new issue can be hard. Fortunately, there are tools and services that assist us in this regard as well, such as AWS CloudWatch

And this completes the CI/CD workflow. Once we’ve passed through all of the steps, the whole workflow starts from the beginning, and it is repeating infinitely as part of our project development process. Note that the explained phases shouldn’t be considered as a hard rule - certain phases can be implemented in different ways and adjusted to your needs.

Can I Bring Additional Tools and Services?

Yes, you can. All of the tools that come with every Webiny project are the tools we’ve determined to work good, but some can still be replaced, if need be.