This feature is available since v5.7.0.

In order to set up your own CI/CD workflow faster (with all of the concepts, steps, and strategies explained in the CI/CD key topics), we recommend you use the built-in CI/CD scaffold.

To use it, simply run the following command from your project root:

Once the list of all available scaffolds is shown, select the Set up CI/CD option and continue by answering the questions that follow.

At the moment, the scaffold allows you to set up your CI/CD with GitHub Actions

only. But in the future, we would certainly like to also bring support for more providers, depending on the interest from the community.

If you plan to use a different CI/CD provider, you can still create your workflows manually, by following all of the recommendations outlined in CI/CD key topics. Also, if you think your provider should be supported out of the box, please open an issue

are often a good choice when it comes to setting up your own CI/CD, simply because of its tight integration with other existing GitHub concepts and resources.

Upon running this scaffold, note that you will need to paste your GitHub account’s personal access token. You can choose to use an existing one, or even better, create a new one simply by clicking on the following link

Additionally, you may be prompted to enter your e-mail address, which will be used only while the scaffold is committing initial GitHub Actions workflow files.

What Actions Will the Scaffold Perform for Me?

No matter whether you choose to set up your CI/CD within an existing GitHub code repository or create a new one, during the scaffolding process, the following actions will be taken on your behalf:

The created workflow files follow workflows described in the CI/CD key topics section. Before running them, you’re free to inspect and adjust them to your needs.

Once the scaffolding has finished, these are the steps we recommend you follow:

While moving through the setup wizard, you get to choose whether you want to create a brand new GitHub code repository, or use an existing one.

In case of the former, note that, apart from the initial GitHub Actions workflows, the created code repository will be empty. In other words, during the scaffolding process, your project files are not automatically pushed into it.

In order to do that yourself, you can run the following commands:

In case of the latter, if you’ve picked an existing GitHub code repository, then most likely your project was already previously pushed into it, and no additional actions are needed.

By default, for every new code repository, GitHub sets the main (previously master) branch as the default one. Since during the scaffolding process, the dev branch was set as the new default, you can delete the previous one.

When scaffolding inside of an existing repository, just double-check if the new dev and previous default branch are in sync. We don’t want to accidentally end up with lost code commits.

Finally, go to your code GitHub repository settings and navigate to the Actions Secrets 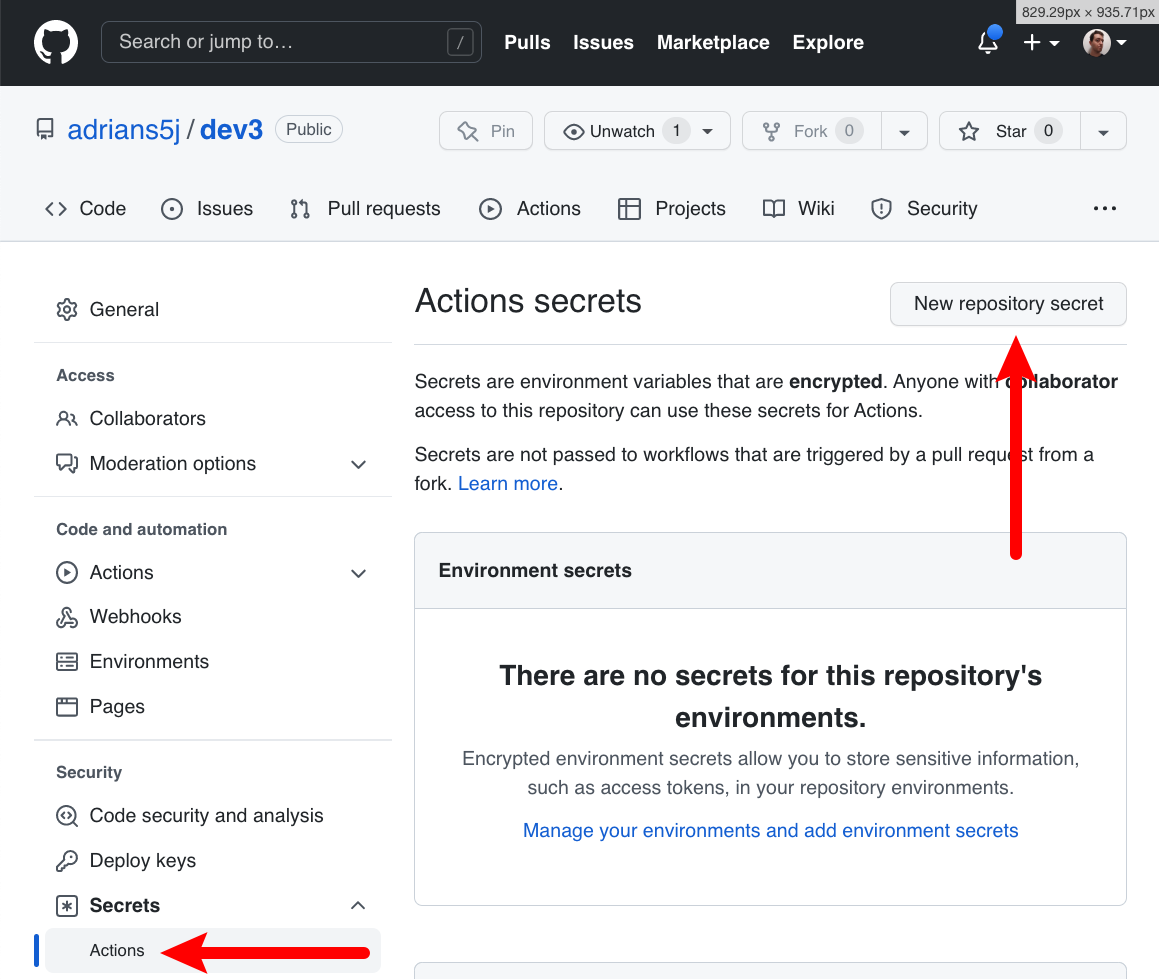 This is where we’ll need to add all of the secrets that are used within the generated GitHub Actions workflows.

Note that, depending on the target branch, the workflows deploy your Webiny project into three separate environments: dev, staging, and prod. Because of this, note that every secret will need to defined three times (once for each environment).

For example, when defining the AWS_ACCESS_KEY_ID environment variable, we’ll end up with the following three secrets:

The following is a list of all environment variables that need to be defined in order for the generated GitHub Actions workflows to work correctly.

AWS_ACCESS_KEY_ID and AWS_SECRET_ACCESS_KEY represent credentials of an AWS account that will be used to deploy necessary cloud infrastructure resources, into the specific environment. Note that, as stated in the CI/CD key topics, we recommend every environment (dev, staging, prod) uses its own AWS account. So, these should be different for each environment.
Learn how to create AWS credentials in the Configure AWS Credentials guide.

With credentials, we also need to specify the AWS region

via the AWS_REGION environment variable.

Upon deploying cloud infrastructure resources with Pulumi, we need to specify the secrets provider. As the name itself suggest, this feature enables us to store deployment-related secrets, for example API keys, connection credentials, and similar.

And although Webiny does not store nor rely on this feature by default, we still need to define the PULUMI_SECRETS_PROVIDER and PULUMI_CONFIG_PASSPHRASE environment variables. This is simply a requirement set by the Pulumi CLI.

To learn more about secrets and how Pulumi handles them, please visit the official documentation

We suggest you use “passphrase” as the value of the PULUMI_SECRETS_PROVIDER secret, and, for the PULUMI_CONFIG_PASSPHRASE secret, that you simply generate a random string as its value.

Be careful not to lose the generated PULUMI_CONFIG_PASSPHRASE secret value. Because if you do, you won’t be able to redeploy already deployed cloud infrastructure resources. You will have to do it from scratch, which means you could potentially lose sensitive data.

The last piece of the puzzle is the WEBINY_PULUMI_BACKEND secret, which determines the Pulumi backend that we want to use in order to store our cloud infrastructure state files. At the moment, here we recommend you use one of the following two options.Either you simply manually deploy an Amazon S3 bucket within the AWS account that’s about to be used to deploy your project into a specific environment, or alternatively, use the Pulumi Service. In case of the former, just set the S3 URI, for example s3://my-project-pulumi-state-files-dev. In case of the latter, simply paste the Pulumi Service Access Token

.
If you choose to use Amazon S3 as the backend and you are using multiple AWS Accounts as recommended, note that you will end up with creating multiple buckets, one within each AWS account. Each Amazon S3 bucket will only store cloud infrastructure state files for a specific shared environment.
For more information on backends, we recommend you read the Cloud Infrastructure State Files key topic.

To start developing, based on the GitHub Flow, the first step of every developer would be to simply create a new branch from the default dev branch. Once ready, we submit a pull request, again against the dev branch.
Read more about the GitHub Flow in the Version Control key topic.

Note that, at this point, the staging and prod branches will still be empty, and no deployments will occur until you actually merge the dev branch into staging, and later the staging branch into prod. Still, if you want to deploy these too, simply do the merging immediately, without waiting for first code changes from developers to arrive.