While developing JavaScript applications, it’s not unusual for developers to have one or more code watching processes running in the background. In general, their job is to continuously detect code changes and perform rebuild (recompilation) operations accordingly, which may include some of the following steps:

Webiny is no different. Whether you decide to create a new React application, a new GraphQL API, or just a simple package, as you develop these, running the webiny watch command in order to rebuild and test them out, is necessary.

The webiny watch command is the number one command you’ll be using while developing both frontend and backend applications.

The command can be instructed not only to watch one or more packages in your Webiny project, but also a complete project application, and even redeploy it to the cloud as you make changes to its application and cloud infrastructure code. Last but not least, the webiny watch command also lets you easily stream logs (console.log calls) from deployed application code directly to your terminal, making it a bit easier to perform debugging, if necessary. 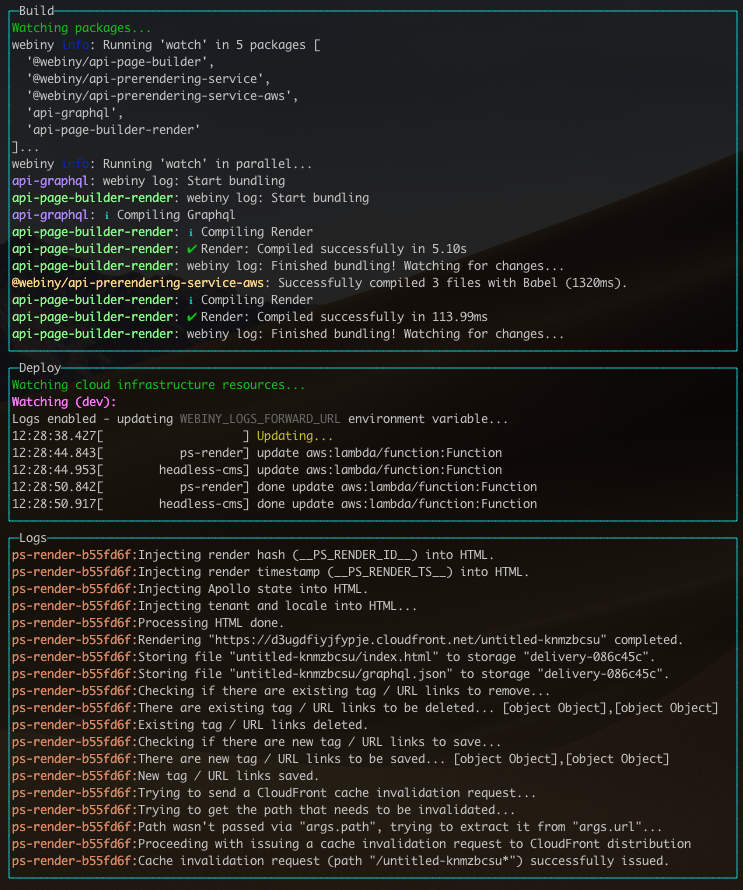 Imagine you wanted to expand the GraphQL API, that’s deployed as part of the default API project application. With the webiny watch command ran, you can just start writing code, save it, and all of the code will be rebuilt and automatically redeployed to your cloud, enabling you to immediately see the changes and to test them out. This approach makes the serverless development a bit more agile and, in a way, mimics the local development you might already be familiar with.

To start watching the default API project application in your Webiny project, in your terminal of choice, run the following command:

Over time, as your project application starts to grow, running the webiny watch command across too many packages may become CPU intensive. When you feel you’ve reached this point, it’s recommended you start specifying the packages you want to watch and develop.

Specifying a Folder Within a Project Application

In the same way, if we just wanted to work on the Headless CMS GraphQL API that’s deployed within the default API project application and whose code is located in the api/headlessCMS folder, we could run the following command:

If the above option is not enough, you can also pick the exact packages you want to watch, using the --package argument. The following command will watch for code changes in the api-graphql and our custom api-car-manufacturers packages:

The --package argument can also take a minimatch

pattern, allowing you to specify multiple packages to watch, with a single --package argument. For example, the following command will watch all packages whose name starts with api-:

Note that when picking packages this way, you should also include at least one package that represents the actual cloud (AWS Lambda) function. These packages are located within your project application folder, and, in the above command, that package was api-graphql (api/graphql).

Aa an additional example, if we were working on expanding the Headless CMS GraphQL API, we’d want to include the api-headless-cms (api/headlessCMS) package, because this is the package that represents the actual cloud function, which we want to redeploy on every code change:

This ensures that the cloud function code is rebuilt on every code change, and thus, that the actual cloud (AWS Lambda) function is redeployed accordingly.

Package names are specified via the name property in package.json files. For example, api/graphql/package.json

While watching and developing project applications, it’s not unusual to debug certain issues by checking the values of one or more variables while the code is in runtime.

If not using the native Node.js debugger, usually we tend to place one or more console.log calls in our code and then run the application again. And although in serverless environments this is possible, when it comes to actually reading the logged data, the developer experience has shown to be a bit cumbersome and really not that straight forward.

That’s why, by appending the -r argument, you can have all of your console.log calls stream logged information directly to your terminal. For example:

Note that this will stream logs from all cloud functions that were triggered while running and testing the code. If you start receiving more logs than expected, the -r argument can also take a minimatch

pattern, with which you can filter out the logs you don’t wish to see. The following example will ensure only logs originating from the api-graphql function are shown:

In order to achieve forwarding, behind the scenes, this feature relies on the localtunnel

Essentially, everything you log in your application code is forwarded to your terminal over public internet. For development purposes, this doesn’t necessarily have to be an issue, but still, if you’re dealing with sensitive data, please take this fact into consideration.

The webiny watch command also lets you simply watch one or more packages, with no automatic redeployments. This can be useful if you’ve just started with creation of one or more packages or you’re writing tests. In other words, you’re not ready yet to integrate the new packages with existing project applications.

To start watching one or more packages, simply omit the project application related arguments, and provide package names, via the already seen --package argument. For example:

Can I Use the webiny watch Command to Start a Watch Process on Frontend (React) Apps?

Yes, and with it, it’s now a bit easier to start a new watch process for these.

Where previously you had to navigate to your apps/admin package and run the yarn start command, now, it’s simply a matter of running the following command:

You can even start watching both admin and website applications at the same time, by running:

Are There Any Requirements for a Package to Be "Watchable" (Using the webiny watch Command)?

The only thing that’s needed is the watch script, in package’s respective package.json file. But note that, all of the packages, including the ones that are scaffolded using the Webiny CLI’s scaffolding utilities, will have this script automatically included, so essentially, there are no extra steps to be taken here.

Can I Append Extra Arguments When Calling the webiny watch Command?

Yes, one of the examples where we use extra arguments is the environment, for example --env dev.

Note that, all of the extra arguments, that you append upon calling the webiny watch command, will be passed to every watch script that’s invoked in the process. From there, it’s just a matter of whether the invoked watch script supports any of these extra arguments or not.

Should Automatic Redeployments Be Used for Frontend Development?

The automatic redeployments feature is not that useful when doing frontend development, simply because you already have your application running locally, and there isn’t really a need to continuously redeploy it to the cloud. That’s why, when you start watching Admin Area (apps/admin) and Website (apps/website) project applications, you’ll notice that the automatic redeployments are disabled. The only thing you’ll be able to see are the code rebuild logs (the Build pane).

This feature really shines when talking about backend (serverless) development, because all of the changes you make locally in your code are immediately reflected in a remote cloud environment.

, then you’ll have to update it to at least to version 2.27.0, as this version introduces the support for pseudo consoles. 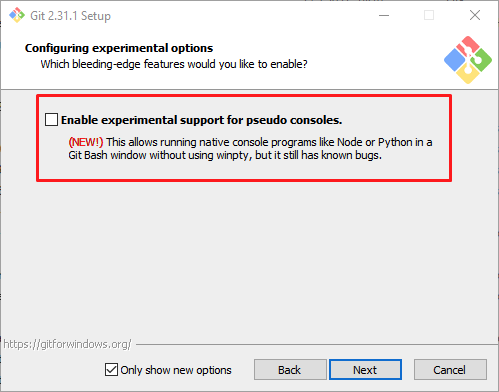