Deploying your project into multiple environments enables us to preview and test new features and bug fixes, before actually rolling them out to real users. This helps us in making our project as stable as possible, and, ultimately, providing the best possible user experience.

When we talk about multiple environment deployments, it’s important to note that we’re talking about deploying multiple copies of our project, both in terms of the application code and, more importantly, needed cloud infrastructure resources.

Serverless technologies and services have many advantages, one of them being the pay-per-use pricing model. This means that, if we, for example, had five environments deployed into our AWS account, and none of them were used (or very rarely), no additional cost would be incurred.

This pay-per-use pricing model, paired with Webiny’s built-in deployment workflows and tools, makes it much more affordable and easier to introduce multiple environments for your project.

Take into consideration that sometimes, projects do require cloud infrastructure resources that aren’t serverless or do not follow the pay-per-use pricing model. In that case, having multiple environments could in fact incur additional cost.

In Webiny’s case and its default setup, one of the resources of that kind is the Amazon Elastic Search

Read more about the cloud infrastructure resources that get deployed into your AWS account in our Cloud Infrastructure key topics section.

There are two types of environments into which we usually deploy to: shared and isolated.

On the other hand, isolated environments are environments that are deployed by developers, for their own development and testing needs. These are usually deployed and destroyed from a developer’s machine.

Within an organization, it’s common practice for developers to have their own cloud (AWS) account, which they use to deploy their isolated environments. This way we ensure that they don’t impact one of the (sensitive) shared environments and enable them to perform experiments more freely.

Read more about how to organize cloud accounts in the Cloud (AWS) Accounts section.

Be sure to check for unused deployed cloud infrastructure resources from time to time. We want to avoid unnecessary cost from mentioned non-serverless resources, that do not follow the pay-per-use pricing model.

The following diagram shows the most common organization of shared and isolated environments in a single project: 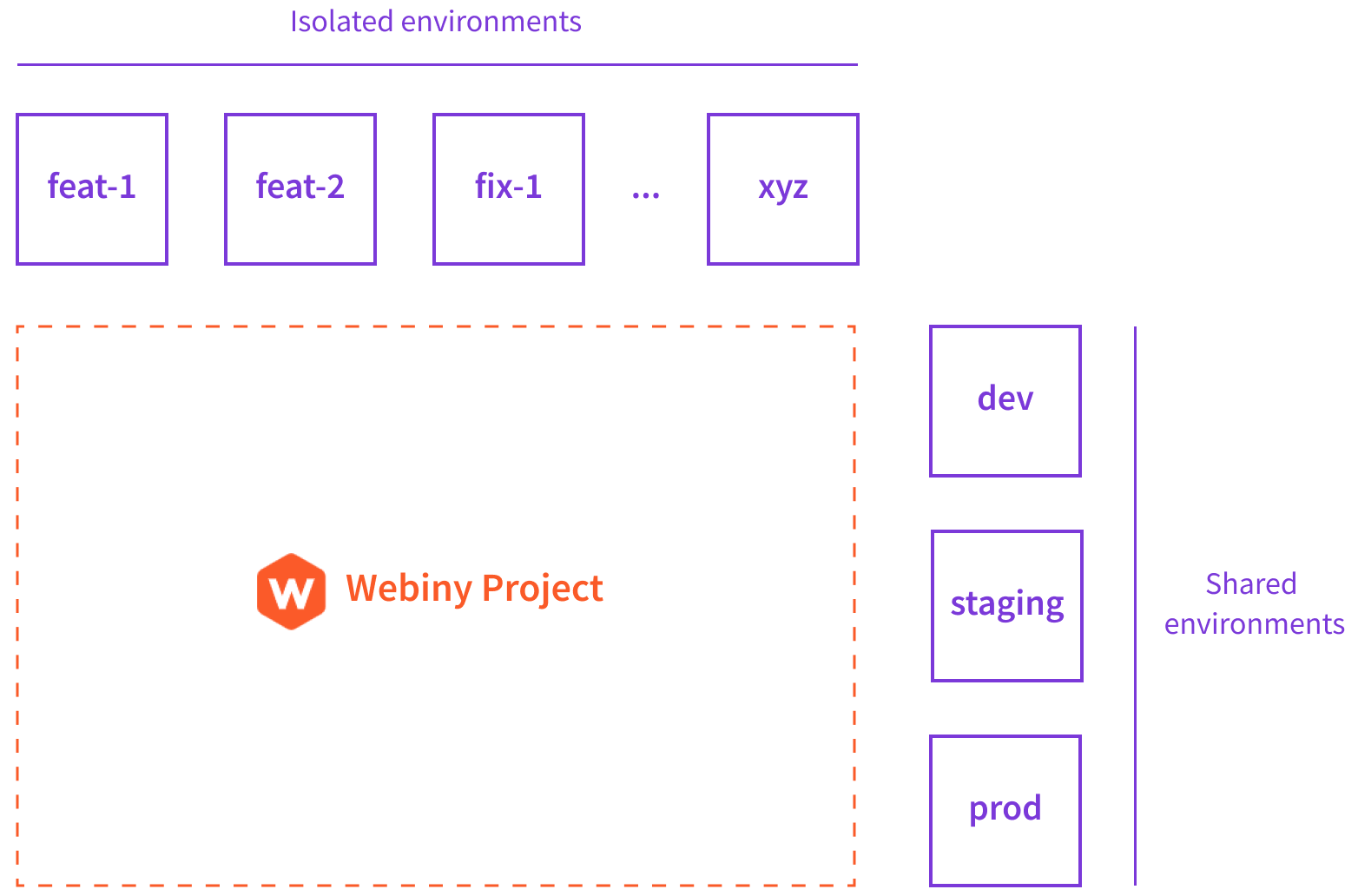 Webiny Cloud Infrastructure - Environments
(click to enlarge)
This structure of environments is also mirrored by branches in your project’s Git repository. More on this in the Version Control topic that follows.

Although there can be more shared environments, most commonly, we end up with the following:

New fixes and features are first deployed into this environment, might be unstable from time to time.

For testing new release candidates in a production-like environment. Meaning, here we deploy the same application code and cloud infrastructure resources that we will ultimately deploy into the production environment, used by real users.

A system used by real users. Must be in a state that is considered as stable, as much of the time as possible.

With shared environments, developers deploy their own environments, where, as mentioned, they develop and test bug fixes and new features. Usually, one environment per developer is enough. If the environment is not needed anymore, it’s recommended it’s destroyed.

In terms of cloud (AWS) accounts, it has been shown that a good practice to adopt is having a separate account for every shared environment and developer in the organization. For example, if our organization consisted of five developers, with the three dev, staging, and prod shared environments, that would be eight cloud accounts in total.

The shared environments AWS accounts will mostly be used from your CI/CD pipeline, which we cover in one of the following sections.

For easier management of AWS accounts, we recommend checking out AWS Organizations

, which is a feature that helps you centrally manage and govern your environment as you grow and scale your AWS resources.

article is also something that provides useful information on the multiple AWS accounts for different environments approach.

Can We Have More Shared Environments?

Yes. The dev, staging, and prod is the minimum we recommend, but you can have more, if need be.

Are the Names of Environments Fixed in Any Way?

Environment names are not fixed or hard-coded in any way. We use dev, staging, and prod as these names are often familiar to developers. Feel free to name these differently if your organization follows different conventions.

Except My Application Code, Should the staging and prod Cloud Infrastructure Also Be the Same?

To enable this, please open your packages/cwp-template-aws/template/api/pulumi/index.ts

file, and uncomment the staging string in the PROD_STACK_ENVIRONMENTS array.